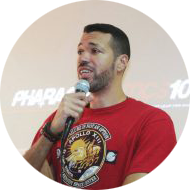 Mohammed Sallam is an ex basketball player for Egypt’s national team and and one of just 100 people from around the world to be shortlisted – from many hundreds of thousands of applications – as a candidate for establishing a colony on Mars. Getting to where he is now is a great achievement and if he’s selected to go to Mars, he’ll go down in history as one of humanity’s greatest and boldest pioneers. Recently, Mohammed came to Sinai with Omar Samra and Wild Guanabana – the award winning adventure tourism company he represents – to walk the mountain section of the Sinai Trail. We caught up with him, to ask a few Qs about Mars and the Sinai Trail. See what he had to say here:

Mohammed, thanks for taking the time to chat with us. Can you tell us a bit about the Mars One project and how you got shortlisted? Right now, you are in a final list of 100 people who might go, which is a great achievement! How will the final group be chosen and when will the decision be made?

The Mars One project started in 2011; it’s a non-for-profit Dutch organization that aims to establish a sustained colony on the red planet by 2031.202,586 applied by august 2013, we went through a series of filtration for around 2 years and currently 100 left, 50 men and 50 women. Sometime next year we’ll go through some challenges somewhere isolated and they will pick 24 out of the 100 to be trained all the way up to 2031. They will be 12 men and 12 women and they will be split into 6 groups of 4s.

It started when I was probably 5, I would go to my room window and stare at the sky asking myself what’s there and why is it there in the first place? I’ve always wanted to go there and see with my own eyes, pictures are cool but it’s nothing like the real thing. Absolutely nothing. Mars is a very interesting place, it used to look a lot like earth billions of years ago, maybe it was a blue planet too who knows. But suddenly some drastic events changed everything about this planet and we need to understand if that’s going to happen to our beloved earth as well. So around 2012 when I saw one of NASA’s rovers landing on mars I started paying attention to this place.

What stories of human exploration have inspired you most throughout history?

Aghhh so many, to name a few; Christopher Columbus, Ferdinand Magellan, George Mallory, Ernest Shackleton and my favorite Yuri Gagarin. They all had one thing in common, curiosity

If Mars doesn’t happen – if you’re selected but choose not to go, for example – is there anywhere else you’d like to explore on earth?

Absolutely, I’ve been dying to really visit this place and start solving the endless puzzles around it. Easter Island. I’d like to find the lost city of Atlantis if one day existed.

Closer to home, you are a sportsman and you represented Egypt at the highest, national level in basketball. When did you try outdoor sports like hiking for the first time and can you remember when you climbed your first mountain?

Dec 26th 2015, Mount Katherine I will never forget how hard it was for me as my ever first mountain, especially on the way down but after that I decided even though it was hard I still think I enjoyed every rock on it. So I headed to Poon Hill in the Himalayas only three months after, Went back to Nepal the year after to hike the Everest Base Camp and now one of the most beautiful trails ever the Sinai Trail.

What about mountains on Mars, are there any high ranges there?

Olympus Mons, the largest mountain/volcano in our solar system, it’s almost 3 times as high as Mount Everest. It is also one of the things that prove Mars used to be a warm place at least once.

Literally everything, first off some of the areas looks really like a Martian terrain, others look like a western movie from the 60s, the food was magnificent and words won’t do justice to sleeping under the stars, but most probably my favorite part is the stories behind every mountain, every piece of land and the 7 proud tribes of this part of Sinai. I really loved it.

Many people around the world are scared to visit the Sinai and Egypt, hearing only bad news. Would you have any message for them?

If you love exploration, if curiosity is what drives you every day then you know that seeing is believing, Please hear the words of the people who visited this marvelous place, the people you know the people you’ve met. Sinai is a big playground for you and me, the ancient land welcomes you don’t be late.

If you go to Mars, you’ll go down in history as not just one of Egypt’s – but of humanity’s – great pioneers, going somewhere none of us have gone before. Would you have any advice for young explorers wanting to get out and discover more of Egypt or the world around them?

Imagine if our ancestors didn’t explore and decided to live on a little piece of land on earth and never went anywhere, what would our world look like today? Until comes someone like you and says let’s cross this ocean because it’s never been done before how about that for a reason? Maybe we’ll learn something tomorrow that we don’t know today, and that is priceless. Go explore and learn.