The Sinai Trail is a 100% Bedouin-run community project. At the beginning, when the Sinai Trail first launched, the trail was a 220km route, taking 12 days to complete, involving three Bedouin tribes: the Tarabin, Muzeina and Jebeleya. Today, it has grown into a 550km route, taking 42 days to finish, and involving five more Bedouin tribes: the Awlad Said, Garasha, Sowalha, Hamada and Alegat. Today, altogether, there are eight Bedouin tribes involved in the Sinai Trail. Each tribe manages the particular part of the trail in its own land. The Tarabin manage it in Tarabin territory; the Muzeina and Jebeleya, and every other tribe, in their areas too, for example. Every tribe guides travellers across its lands to the borders of the next tribe. When something affects the trail as a whole, decisions are made collectively. All decisions about the trail and its future development are made by local Bedouin tribes. The tribes of South Sinai have long existed in an alliance called the Towarah and it is over 100 years since all these tribes collaborated on a travelling route in the way they do today on the Sinai Trail. The Sinai Trail is reviving old paths, alliances, and history. The Bedouin cooperative is supported by a wider Sinai Trail Team, including men and women from across mainland Egypt and Europe, who add extra skills and strengthen the project in key areas. 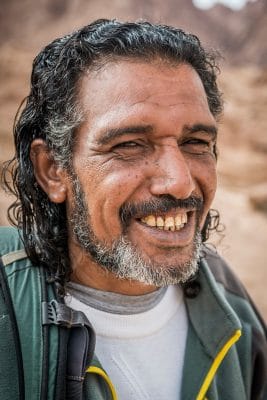 Founder & Manager.
A Bedouin of the Jebeleya tribe, Faraj Mahmoud grew up in the highlands of St Katherine and is a leader of the tribal community today.
He began guiding as a teenager and built up a formidable knowledge of the Sinai’s mountains and deserts over several decades.
Known for his vision and bridge-building capacity, he is one of the original founders of the Sinai Trail and co-manages the project today on behalf of eight Bedouin tribes. Alongside his work for the Sinai Trail, he is a co-founder of the Three Peaks Egypt Challenge. He also owns a Bedouin Camp, and fixes work for NGOs, universities and media organisations in the Sinai. 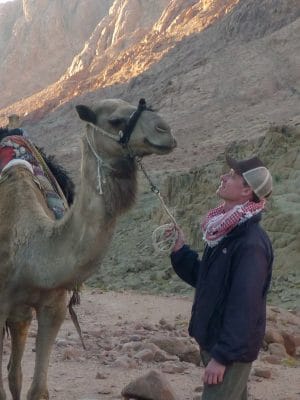 Ben is one of the founders of the Sinai Trail. He oversaw its development into one of the Middle East’s leading hiking trails from the very beginning. Parallel to the Sinai Trail, he created the Red Sea Mountain Trail with Bedouin of Egypt’s Maaza tribe. He authored Trailblazer’s 2014 guidebook Sinai: The Trekking Guide and is a founder of the Sinai is Safe Campaign, which aims to create a counter-narrative to bad news about the Sinai. He developed the route for the Three Peaks Egypt Challenge and is one of its founders today. His professional focus is on exploring how modern tourism can help conserve the endangered heritage of the Middle East’s Bedouin communities. Today, Ben co-manages the Sinai Trail with Bedouin leader Faraj Mahmoud on behalf of eight Bedouin tribes. 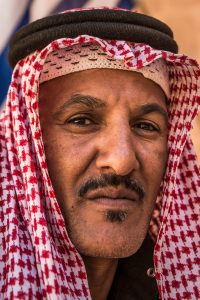 Sheikh Ahmed Abu Rashid grew up in the mountains of St Katherine, working as a guide until his 30s, when he became one of the youngest Sheikhs in the Sinai. As well as a Sheikh, he is the chief bridge between the Monastery of St Katherine and the Bedouin community. He is a key part of the Sinai Trail team, helping with outreach into new tribal areas, and representing the trail officially.​ 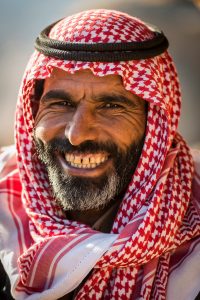 Musallem is one of the Tarabin tribe’s most experienced, trusted guides. As well as hiking, he has been a pioneer for mountain biking in the Sinai, developing many new routes.
One of Musallem’s greatest passions in life is passing his knowledge of the Sinai and its Bedouin culture to younger generations. He is developing a new Sinai Trail training programme. His dream is to run his own Bedouin school.​ 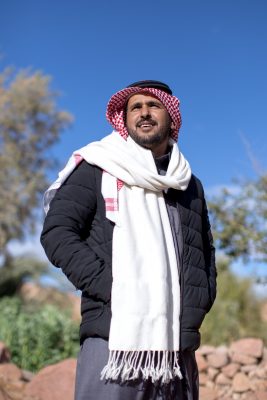 Youssuf is the son of Sheikh Barakat who comes from a guiding family in the region. His family have been handling caravans and groups of people passing through their tribe’s land for several generations, and so he started helping with trips since he was just a little boy. Youssuf is from West Sinai, which was more impacted by the tourism crash than other regions in Sinai. He hopes to overcome this through the Sinai Trail by showing people the beauty of his area, creating jobs for fellow tribesmen and passing down knowledge to future generations. 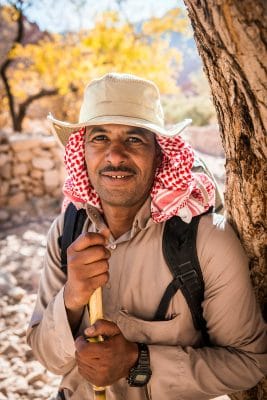 Nasser grew up in Abu Seila, a small village near St Katherine. He began guiding when he was young, and has a formidable knowledge of the mountains, admired even by Bedouin elders. His other area of expertise is the Sinai’s plants and animals. When he’s not guiding, Nasser still spends his time in the mountains, walking with his children, caring for his camels and tending to his orchard. ​ 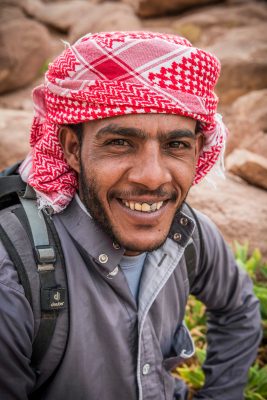 Salem Abu Ramadan is another tribesman of the Jebeleya, from St Katherine. He walked further than any Bedouin of the region in scouting routes for the Sinai Trail, walking thousands of kilometres over five years. Today, he works as a head guide on the Sinai Trail. He is also a founder and head guide of the Three Peaks Egypt Challenge. Salem has guided dozens of challenges on the route, including individuals and groups from all around the world. He is a mountain man, known for his toughness, excellent route-finding and knowledge of the Sinai and its mountains. Nobody of his generation from the Bedouin has walked the mountains of the Sinai more widely. 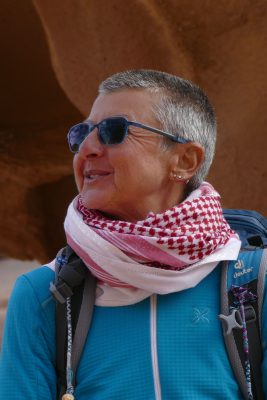 (General Office Manager, Italy) Cristina grew up in Italy, on the edge of the mountains in the north. She abandoned an accounting job in her 20s and travelled to Egypt, where she has spent almost all her time ever since. She worked in Sharm el Sheikh as a diving instructor for over 20 years and managed several diving centres. More recently she began to hike and explore the deserts away from the coast and she was a member of the first team to thru hike the original 220km Sinai Trail in 2016. Cristina joined the Sinai Trail team in 2017 and today organises and joins trips and manages the off trail team. ​ 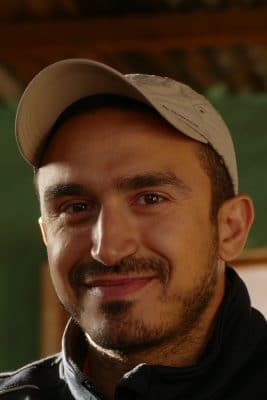 Originally from Egypt, Mostafa spent long parts of his childhood in Saudi Arabia. He was part of the first group to walk Egypt’s Sinai Trail in 2016. He began working for the Sinai Trail soon after and now fixes trips and trains hikers for thru hikes. He also organises trips for its sister trail, the Red Sea Mountain Trail and manages the Three Peaks Egypt Challenge, Egypt’s first ever mountain challenge. Mostafa is a outstanding quiet leader whose work has underpinned the sustainable growth of some of Egypt’s most successful community tourism initiatives over the last three years.